As the victim of an wanted and unsolicited divorce and annulment, and still Faithful to my vows and the Mother of my children, I have told my kids - all teens and older - many of the same things that are related in the article below, almost word for word. After four years, I believe I have made some small advancement in the understanding of some that are still estranged from me and who still hold that all the marital woes are mine to own. Leticia Adams has given validity to the Truth - the Catholic Truth - of my counsels to the kids to the contrary and in the process supported this Father in catechizing his kids. Enough so that I have sent them emails and copied this article for their hopeful edification and understanding.

I wrote them that if they are not prepared for what I, Mrs. Adams and countless others have done and are doing - namely, defending our marriages and our spouses and sanctifying each other in the process  - then they had better not ever pronounce an "I Do" before Christ and spouse until they are.

Leticia Adams has hit a very broad nail head I've been fighting since day one with the kids - the "Happiness Factor". I've always said you can't debate emotions, you can't discuss anything where emotions predominate, and you will never change minds or opinions deeply rooted in an emotional position, which is all the "Happiness Factor" is - emotions. Reason must take hold first and - balanced by emotions to a degree - only then can some gain be made to steer those in error back to True North. I am hopeful this article starts that process with my kids. I have been too long away from some and still miss them dearly...

Simcha Fisher's referenced article is also an extremely valuable companion to what Leticia Adams has written and well worth the time it takes to read both. These two writers speak with much needed in-the-trench marital wisdom. Thank you both...


MARRIAGE IS NOT A FAIRY TALE 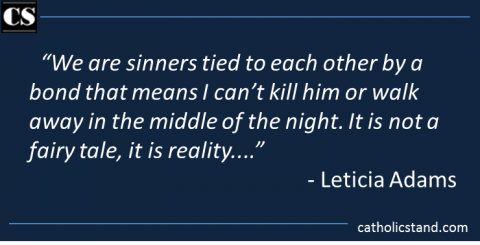 I read this piece by Simcha Fisher that was a response to this piece by Emma Smith on Catholic Exchange. I thought I would add my piece. I feel like I have a different point of view than both Simcha Fisher and Emma Smith, but I agree with Simcha when she says that marriage is “a tangled ball of good intentions and bad habits, unhealed wounds and unfounded desires.” These words should be written on the top of every single sheet of paper handed to a couple preparing for marriage, in or out of the Catholic Church.
My life experience includes having a child out of wedlock at seventeen, being in an invalid marriage with a drug addict and being married in the Church to the love of my life, thinking that God would protect me from ever being hurt by my husband simply because we were in a valid Catholic marriage. Having been where I’ve been, I think that the root problem is that many people think that marriage is an escape from the hurts of the world. I don’t really know if it comes from the fairy tales or romantic movies, but I do know that in a society like ours that is creating wounded human beings because of divorce and broken homes, and people just want relief. Relief from pain, being unloved, the heartache that comes with living in a broken home and a loss of sense of self.
We are generations deep in the broken home norm, and these generations are also the furthest away from any kind of faith. They are the “nones” as people like to say. They don’t believe in God and they have no religious affiliation. Yet they are the ones in the most pain. They are left looking for love. Their parents didn’t do it and they have no clue who God is so they can’t have faith in Him to do it.  They are left wandering the world looking for that one person who will love them, validate them, and keep them safe. And that is a huge mistake.
Read the rest at Catholic Stand. The link to the article is here...