From Nobility and Analogous Traditional Elites, help for those who suffer from and are victims of adultery, jealousy and unfaithfulness...and I'd personally lump divorce and annulment in there, as they both are by-products of the other three.

Be sure and click the link below the excerpt to read the complete article...it's well worth the time. 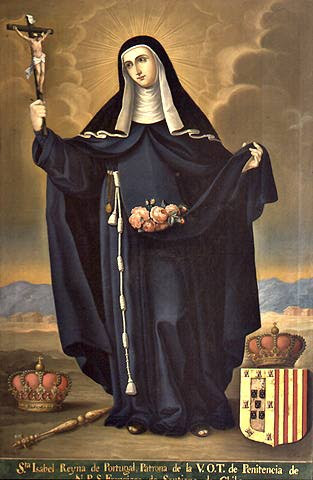 St. Elizabeth of Portugal, painting is in the Museo Colonial de San Francisco in Santiago, Chile.

ST. ELIZABETH was daughter of Peter III, king of Aragon, and granddaughter of James I, who had been educated under the care of St. Peter Nolasco, and was surnamed the Saint, and from the taking of Majorca and Valentia, Expugnator or the Conqueror. Her mother, Constantia, was daughter of Manfred king of Sicily, and grandchild to the emperor Frederic II. Our saint was born in 1271, and received at the baptismal font by the name of Elizabeth, from her aunt, St. Elizabeth of Hungary, who had been canonized by Gregory IX in 1235.


Her birth established a good understanding between her grandfather James, who was then on the throne, and her father, whose quarrel had divided the whole kingdom. The former took upon himself the care of her education, and inspired her with an ardor for piety above her age, though he died in 1276 (having reigned sixty-three years,) before she had completed the sixth year of her age.

Her father succeeded to the crown, and was careful to place most virtuous persons about his daughter, whose example might be to her a constant spur to all virtue. The young princess was of a most sweet and mild disposition, and from her tender years had no relish for anything but what was conducive to piety and devotion. It was doing her the most sensible pleasure if any one promised to lead her to some chapel to say a prayer. At eight years of age she began to fast on vigils, and to practice great self-denials; nor could she bear to hear the tenderness of her years and constitution alleged as a reason that she ought not to fast or macerate her tender body. Her fervor made her eagerly to desire that she might have a share in every exercise of virtue which she saw practised by others, and she had been already taught that the frequent mortification of the senses, and still more of the will, is to be joined with prayer to obtain the grace which restrains the passions, and prevents their revolt. How little is this most important maxim considered by those parents who excite and fortify the passions of children, by teaching them a love of vanities, and indulging them in gratifications of sense! If rigorous fasts suit not their tender age, a submission of the will, perfect obedience, and humble modesty are in no time of life more indispensably to be inculcated; nor is any abstinence more necessary than that by which children are taught never to drink or eat out of meals, to bear several little denials in them without uneasiness, and never eagerly to crave anything. The easy and happy victory of Elizabeth over herself was owing to this early and perfect temperance, submissiveness, and sincere humility. Esteeming virtue her only advantage and delight, she abhorred romances and idle entertainments, shunned the usual amusements of children, and was an enemy to all the vanities of the world. She could bear no other songs than sacred hymns and psalms; and from her childhood said every day the whole office of the breviary, in which no priest could be more scrupulously exact. Her tenderness and compassion for the poor, made her even in that tender age to be styled their mother.