My Commentary on Sacrilege and Holy Communion 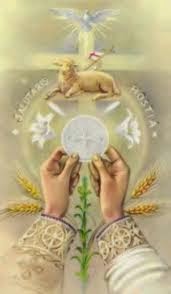 The Catholic Encyclopedia defines sacrilege as "...the violation or injurious treatment of a sacred object", that proclaiming a sacred character to a thing is a function of the governing power of the Church and that there are three kinds of sacrilege: personal, local and real.

Local Sacrilege is the violation of any place sacred, such as churches, oratories, cemeteries, etc.

Personal Sacrilege is defined as dealing "...so irreverently with a sacred person that, whether by the injury inflicted or the defilement caused, there is a breach of the honour due to such person."

Real Sacrilege is "...the irreverent treatment of sacred things as distinguished from places and persons." Receiving Holy Communion in the state of mortal sin and an invalid Consecration are examples that apply here.

Falling under Real Sacrilege is the notable and deliberate irreverence towards the Holy Eucharist which, as we Catholics believe, is the real Body and Blood - after the Consecration - of Our Lord Jesus Christ. (See CCC #1333 and Balt. #3 Q. 871 & 872.) It is, reputedly, the worst sacrilege that can be done.

It has recently been brought to the Catholic worlds attention that a sacrilege may have occurred as regards the Holy Eucharist. In my opinion (others can be found here and here) and from my understanding of the above, at the very least there has occurred real sacrilege at the mega-mass in the Philippines - and at World Youth Day assemblies for that matter. Imagine, if you will, this picture:

After the Consecration, a priest passes the corporeal form of Our Lord's Body to the first person among many hundred of thousands waiting to kiss the Sacred Hands and Feet. In the background comes the cacophony of "pass Him around...pass Him around"! It grows louder and louder until finally the sacred ministers accede and simply start "passing Him around". As He passes from un-Consecrated hand to un-consecrated hand, many merely get to touch the Sacred Humanity as He is passed along, which body still bears the bloody remnants of the scourging. For all to reverently kiss the Sacred Hands and Feet is nigh impossible, so just a touch suffices among the throng, who then non-nonchalantly wipe their hands on their clothes to clean themselves of the blood left upon their hands at His passing. They smile and excitedly jabber at their neighbor "I touched him! I touched him!" And they wipe again the blood stained hands upon their clothes, remembering after mass they are going out to eat and they don't want to get blood all over the steering wheel. They have left the Sacred Blood everywhere - their clothes, their neighbor's clothes, on the ground. But they are euphoric and never-mind the irreverence shown towards the Sacred Humanity of Our Lord Jesus Christ, truly present in the Corporeal Form and recently passed around. At least they got to touch him.

I've tried to paint what - in my mind anyway - is going on during the "mega masses", whether in the Philippines, at World Youth Day assemblies, or any other venue like them. No theologian nor priest nor even a bishop can explain away the irreverence that was shown towards the Blessed Sacrament, though it has occurred (see here). We Catholics have been brought up since the age of reason to hold in the utmost of respect the Sacred Species during any Mass, not just masses on Sundays and Holy Days of Obligation. Papal Masses are no exception. It is obvious with a few hundred thousand people gathered in Manila - or in St. Peters Square - that the reverential distribution of Holy Communion is nigh impossible, if for no other reason than allotted time available for distribution. Therefore, reason and prudence alone dictate that - for most - a Spiritual Communion is the best one can hope for, as the blog Te Deum laudamus recently posted. Only those few dozens nearest the front could truly hope to receive the Body and Blood of Christ from Papal hands or those of the assisting priests.

For others to expect anything more while maintaining the reverence due the Sacrament is pure folly.