Doing my part to get the word out...

Rorate Caeli's latest on the Franciscan Friars of the Immaculate saga. Pray this debacle ends soon with the return to "full communion" (as if they could have been any more "full" than they were before the inquisition.)


RORATE EXCLUSIVE Video of Franciscans of the Immaculate Seminary the day it was shuttered by Commissioner Volpi
When will the mainstream media demand answers?

On December 8, 2013, the Feast of the Immaculate Conception, the the Theological Seminary of the Immaculate Mediatrix (STIM) of the Franciscans of the Immaculate (FI) was closed by their Apostolic Commissioner, Fr. Fidenzio Volpi. On the same day, one of the friars filmed the entire day, which presents the way of life in that same seminary. 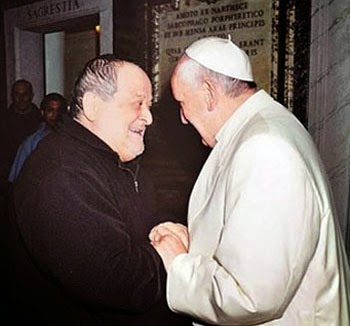 Volpi meets with Pope Francis the day the seminary was closed.
This footage was then kept in secret, witness of something no longer tolerable to those in power, unseen until now.

With all the problems and scandals in the religious life in our times, which seem to be deemed praiseworthy by the highest authorities, what you'll see in this video is what they find so unacceptable, so horrific, so dangerous that it had to be stomped out and crushed as "specifically ordered by the Vicar of Christ," Pope Francis.

Punishment and suppression -- and with no trial.

But perhaps our Lady, on her feastday, is offering a vision very different to that which seems to dominate presently in the Church -- a vision of the consecrated life which is, as Simeon says of Christ, a sign of contradiction.

A great number of the friars seen in this film have had to flee after the closing of the seminary, having found themselves in a new atmosphere of doctrinal corruption and moral relaxation, of the disintegration of the religious observance they had avowed themselves to maintain on pain of grave sin.

We say "flee" because it's true. We hear from numerous FI saying how they are in danger, how another Friar they know will speak with us "once they're safe" meaning in a new diocese with a friendly bishop. You'd think they were fleeing 16th Century England and the Tower -- but this form of priest hunting is so much more dangerous as it comes from within.

Watch the video. Spread it far and wide. And pray to our Lady today to make good of this nightmare and grant these good men peace at last.