Reflections On An Anniversary (of sorts)... 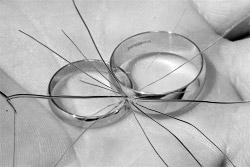 Although it could have been a day or two earlier, July 12th marks the fifth year of my voluntarily leaving the family home to give a still-much-loved someone her "space". I did not realize at the time that I would never again sleep under its roof, talk more than a few days-worth of words to a third of my children and be mostly estranged from over half. My naivete was at its greatest apogee; my own ideal (and not the Catholic ideal) of "...wuv, tru wuv..." was still extant. I was mere days away from letting the whole of our marital problems be placed upon my shoulders alone, but more importantly, on the verge of accepting defeat of myself, my marriage and the Sacrament of Matrimony.

At some point over the next few weeks, however, the proverbial line-in-the-sand was drawn, and not by human hands. The realization (and this was the Grace of the Sacrament coming into play) finally dawned of the import of what was going on and the ease with which I was participating in it. The silent voice of Grace was attempting - and perhaps for the last time - to strengthen my weakened Free Will. It wasn't a Saul moment - more just a slow re-awakening - but it nonetheless translated into one simple statement: "Choose now: Your will or Mine?"

It's obvious by now what choice was made and - despite the continued personal missteps and mistakes - one never regretted. The acceptance of the marital Cross - the entire Cross, not just the portion that I chose - was now fully embraced. The true meaning of love - Our Blessed Lord's love, the non-reciprocal love He gave from His Cross - was now also fully embraced. No...not so much embraced as remembered, in the words spoken 22 years earlier: "For better, for worse; for richer, for poorer; in sickness and in health; til death we do part."

What has the past five years wrought?

It gets worse, as most any divorce Respondent, Catholic or not, will tell you. And it does, believe me, and let no one tell you otherwise. If any do, run away from them as you would any other near occasion of sin. They are and will ever remain, a danger to you and to your vocation...it will be hard enough for you keep unchaste thoughts from invading your mind, as it has been for me. Huh? What?!? Yes, my Friends...it may be a continual temptation for you. For even though the heart may be closed to all but your first spouse, after having drunk the wine for years or decades, do you not think such temptations won't be there?  That you won't ache for a warm body - any warm body? Thankfully, it hasn't happened. But don't be naive. Don't be foolish. Don't be stupid. Read and take to heart this 2014 post by Fr. Peter Carota: 10 Traditional Catholic Practices To Get Out Of Habitual Sin Especially Of The Flesh.

You are and will remain a weakling if you try and carry this particular Cross alone, devoid of any help from the One Person who knows about pain, misery, weakness, unjust accusations, unrequited love, etc. He only requires that you silently give. And then give more. And then give more still.  And when that giving and the ensuing silence becomes overwhelming; when you're on the precipice of discouragement; when you think He can't possibly be listening; you will look over and there He will be, helping you up, assisting you in carrying your Cross  - Him, Simon the Cyrene, to your Scourged Christ. Think it not a proper analogy and maybe even scandalous?  It remains a truth nonetheless, for once the marital Cross has been fully accepted and embraced - as did Our Lord His own of Redemption - it becomes a very apt analogy. You may then truly walk - in imitation of His - your own Way of the Cross. For you, and for your spouse, children and marriage. Could He not be more pleased?

So, where is it all now, after 5 years? It's still a struggle some times. At other times, not so much. Most always the stress still affects me. I've gone from no kids living with me, to two, and now back down to one. That in itself is a far cry from the earlier years when I had none, and a distinct privilege I never thought I would ever have again.

I have three years to go until my youngest turns 18, graduates high school and this madness ends. I will be then a fairly young 65 years old and - by modern standards - able to retire and live comfortably for whatever remains of my life. I can travel, go anywhere I want when I want and be mostly debt free. I will be able to live in subsidized housing, have subsidized medical care and subsidized cell phone. My burial plot is bought and paid for, my funeral arrangements planned and set, down to the wording on the headstone. I will have smooth sailing for whatever life I have left. Awesome, right?

Not really...I would give it all up in a heartbeat to get my family back. The broader question really becomes, for those contemplating divorce:

Are you willing to put yourself through all what I am presently experiencing, or, would you rather fall on your knees before the Altar of Christ, and selflessly renew the vows you made years or decades before?

I sincerely hope and pray that all spouses in marital trouble hear what I did (albeit before the divorce line is crossed):

"Choose now: Your will or Mine?"