"I've dealt with my ghosts and faced all my demons
Finally content with a past I regret
I've found you find strength in your moments of weakness
For once I'm at peace with myself
I've been burdened with blame, trapped in the past for too long
I'm movin' on..."    ("I'm Movin' On" by Rascal Flatts)

And so here we are, today, October 15, 2016, the 6th anniversary of living within the bubble wrap of divorce. In it's entirety, the timeline breaks down as follows:

Not a long time, by others standards who have lived it far longer than I, but nonetheless an era I'd just as soon not have had to live through. Nor should anyone, for that matter. My opinion of divorce as a means to solve marital woes is no secret (at least within this blog) and will never change. I still believe it to be - in the cases of the 80-plus percent of "irreconcilable differences" - an escapism for the sake of the adults, more so than the "it's for the children" meme. My justification for this statement? Simply this: Can an action that has as its main byproduct known and documented harm to children really be undertaken just "for the children?" How could any parent fall for such drivel? How could any parent (especially Catholic ones) truly justify an emotional action that perhaps may end their own emotional woes, but at the same time have no interest (can they be so naive?) nor, apparently, the understanding in knowing that all they have done is to transfer their own emotional woes onto the backs of their own children? Children who - no matter their age - are ill-equipped to handle them? It defies logic, and Mr. Spock would raise his quizzical eyebrow at the very thought of trying to parse that objectively true fact. 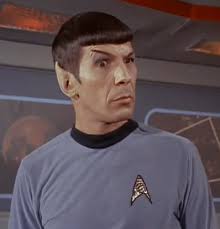 I've long since stopped trying as well, and have learned to live within the bubble I had a hand in the making of; a hand in trying to stop before it got its own wind; and a hand in trying to repair the damage already done. The die has been cast and little in the way of overt and external actions on my part are going to change mindsets that have seemingly become immune to change. If I had to put a finger on the exact moment in time this revelation sunk in, it was probably the day one of my older teenage children remarked to me:

"I don't mind sacrificing my happiness..."

Now...tell me that your Parental Heart didn't just have a fatal myocardial infarction. I know mine did before the last sound of "happiness" ever reached my ears. I was simply dumbfounded at such a statement and it did but confirm the emotional cocoon that some of my children were yet wrapped in after 6 years - and likely will be for some time to come, apparently. No less so than other children of divorce, and no less the heartache for the parent or parents of those children.

In searching for a theme for the final entry of this divorce trilogy, I fell back onto the oft-used and ubiquitous meme of "..movin' on", which seems to be yet extant - but no longer exclusive - to the bubble of divorce. The first stanza of Rascal Flat's song surely speaks to a large majority of those enmeshed in divorce as innocent respondents (and here I refer to those who neither promoted nor wanted divorce - no matter their own frailties) and who continue the march onward in the battle to repair family and parent-child relationships - and their children's lives. Respondents who can identify "...with [their] ghosts and faced all [their] demons, Finally content with a past [they] regret". As would we all, for who would not have any regrets over the incalculable harm inflicted upon their own children? And the contentment comes from knowing that, although they may not yet be forgiven by some, they are at least forgiven by the only One that trully matters through the power and efficacy of the Sacrament of Penance. It is within this Sacrament that they "find strength in [their] moments of weakness", as well as the courage and fortitude to continue to carry the Cross their Lord has placed before them. And no, Christ does not Will - nor want - evil to befall us, but when it does so unbidden, He will always provide the means to endure - if not always with patience, at least with conviction and courage.

So...how to end this? What do I pass along that has not already been said before? I'll not write of my personal woes any longer to be sure - there are others who have fared far, far worse than I, and continue to do so more silently. I sincerely hope that what has already been written has, at the least, caused some who are contemplating divorce to step away from the precipice and re-evaluate their priorities - and your own personal happiness is not one of them when you have children, my friends. You willingly, albeit implicitly, gave your assent to the potential for marital unhappiness the moment you said:

Does a personal commitment vowed then, mean so very little now?

For me, I will continue to do what I have always done, though now more so in the background than overtly. Too much time has elapsed for certain minds and hearts to voluntarily change, though I fear the life's lessons yet to be learned for those dear to me. But such is life, is it not? We either change of our own volition, or we are forced into change by circumstance, which many times is not going to be to our liking. Whatever the future may bring, I will continue to ensure that my children will always know they will forever remain much loved in my heart - as I hope will all children of divorce concerning their own parents.

"At last I can see life has been patiently waiting for me
And I know there's no guarantees, but I'm not alone
There comes a time in everyone's life
When all you can see are the years passing by
And I have made up my mind that those days are gone."

Please. Wake up to reality before your days are gone - along with your wife or husband...and your children.


Look Thou upon me, and have mercy on me, O Lord, for I am alone and poor. See my abjection and my labor, and forgive me all my sins, O my God. (Ps. XXIV.) To Thee, O Lord, have I lifted up my soul. In Thee, O my God, I put my trust, let me not be ashamed.