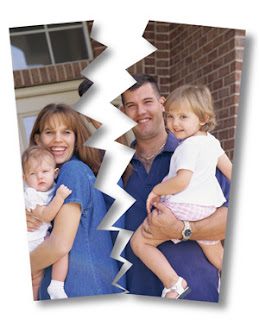 Rather than working on my weekly financials, I find myself writing about the upcoming 6th Anniversary of one of the most tragic events in the history of the world: another Catholic family decimated and destroyed by No Fault Divorce, with the complicit approval of the modern-day One, Holy Catholic and Apostolic Church. Now.. I don't blame the Church for the faults of two mortal Souls who could not come to grips with their respective weaknesses, but only for the lack of pro-active efforts to stem the destruction that was not forthcoming. All I received was a terse excuse from my Bishop buried in so many other paragraphs of his reply to my pleading: "...your marriage is irreparably broken...". So...rather than initiate Canon Law for the reconciliation of separated spouses (there are 7 of these); rather than calling for a conference to discuss the effects of divorce on so many children (10); rather than calling two Catholics to the carpet for reneging on their respective vows; rather than requiring two spouses in marital discord to seek marital counseling, all I got was a hands-in-the-air-all-encompassing-phrase about my marriage being "broken" and unfixable - even though there was one earthly entity that could attempt a repair, but overtly refuse to do so. Dereliction of duty comes to mind each time I think of it.

So...what has transpired over the ensuing years?

- ongoing Parental Estrangement from a third of the children.

- ongoing financial strain (though admittedly, this one is becoming more stable as the youngest two kids reach the age of maturity (18).

- ongoing concern for the Souls of some children who cannot let go of past Parental relationship errors, when the principal reason for their holding on to them no longer exists, if it ever existed at all.

- and the stark, objective reality that the above will affect them more deeply than they can ever know, should such reconciliation not occur.

You need to understand that my kids - in the short term only - seemed to have been less affected by this travesty than most probably were under similar circumstances. Those who choose to remain separated do so, I believe, simply because all their anger was - and is still - directed towards one parent only, and that because the proper methods of pursuing divorce when children are involved were simply ignored. And there is little overt action I can do about that - then or now - though I have tried. Behind the scenes, however, my door has and will always remain open; my heart has and will always remain loving; my prayers have and will always remain forthcoming. The rest must remain, as it always has, in the capable hands of their Blessed Mother, to whom all were Consecrated at Baptism. She will eventually set things aright, at the right time, in Her good time.

I must confess, however, that Her time doesn't always set well with my time - in my impatience, I want relationships restored sooner, rather than later; my heart wants to rekindle the parent-child love it so misses before my death, rather than after; I want my arms to wrap my children in the warmth of parental love when we all can still feel it, rather than them wrap theirs around a lifeless body and attempt to feel a love that can no longer be reciprocated. But my time is not Our Lady's time, nor is it Our Lord's time.

It must be that I need to accept this exercise in patience, reparation and humble subjection to the Our Lord's Divine Providence.  Only He knows the hour of mine and my children's deliverance from this evil that has been an infected and ever-festering open wound for 6 years now. I will tell you that it remains, at times, very difficult to remain above it all and leave all in His hands; to continue the non-reciprocal love that is so necessary within this environment; to not become emotionally unstable at the thought of dying alone and unloved by some of my children. But for the Grace of God I would be a melting dish of unflavored Jello, no pun intended, for it is only His Grace that keeps this body and Soul formed and of right mind.

And don't think for a minute that you would be any different if you found yourself in the same or similar situation - no vicarious intuition can prepare you for what a divorce does to you, your family, your children or your life. You do not want to go there.

If you think you have marital problems now, be prepared to accept them
x infinity if you pursue divorce as a matter of correction. You will be hit head on with no air-bag for protection; no EMS Technician will be standing by to give you oxygen; no hospital will be close enough to save your family from bleeding out before your very eyes. You will find yourself suspended in a surreal moment in time, from which nothing you can do can ever stop the devastation and decimation unfolding in slow motion before your eyes.

As I've written many times in the past, "Divorce is a puss-filled, germ-oozing, cancerous, leprotic scourge that never heals..."

My opinion has not lessened no matter how many times the above gets written.

LIFESITE NEWS: Kansas bishops: Catholics must vote with ‘catastrophe’ of abortion at ‘forefront of their minds’

KANSAS, September 29, 2016 (LifeSiteNews) — In a video on Catholic voting, the bishops of Kansas instructed the faithful to “place special emphasis on those issues where Catholics must speak with a unified voice because of the reality that certain laws directly contradict Church teaching, the natural law, and the good of society.”

The video featured Archbishop Joseph F. Naumann of the Archdiocese of Kansas City in Kansas, Bishop John B. Brungardt of the Diocese of Dodge City, Bishop Carl A. Kemme of the Diocese of Wichita, and Bishop Edward J. Weisenburger of the Diocese of Salina. In the video, the bishops also said that Catholic voting should involve bringing a “Catholic viewpoint” to the immigration debate and should promote “good stewardship of the environment.”

Brungardt said that many issues, like immigration and healthcare, must be considered “in light of Catholic social teaching,” but Catholics might not agree on policy for addressing such social problems. However, “our political preferences should be shaped by the application of Catholic moral principles to current circumstances,” he said.

As such, Brungardt said, “All Catholics have a moral obligation to keep [the] human rights catastrophe” of abortion “at the forefront of their minds when voting.”

“In our country, over one million unborn children are killed by abortion every single year,” he said.

The bishops warned that government agencies are increasingly “attempting to punish individuals and institutions that adhere to the truth that marriage can only be between a man and a woman, and that every child deserves a mother and a father.” They noted the role judges play in this crackdown.