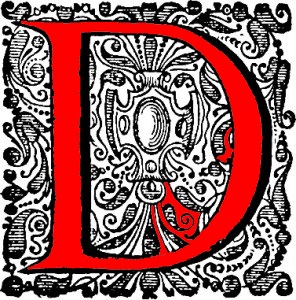 The Scarlet "D" (of divorce) an innocent respondent seems to forever face is the assumption that he/she didn't know the first thing about marriage: how it works; how to keep their spouse and kids "happy"; how to overcome their own frailties; how to adapt, to adjust or to adjudicate the myriad of problems - real or imagined - of self, spouse and kids. It's not true, of course, but it seems that way to me. More specifically, the various attitudes and the seemingly overwhelming personalities which have to be navigated are compounded into infinity when spouses are on opposite sides of pretty much all things, including children and marital problems. If the words "United We Stand; Divided We Fall" had a clearly narrowed meaning when eloquently spoken by Patrick Henry, their meaning today is more broadly interpreted. And nowhere is that interpretation more broader than in marriage and divorce. If Charity is the first of the Theological Virtues to fall in a divorce, then certainly temporal marital Unity follows closely on its heels. You can't keep both intact if either one falls, for both are, in this writer's opinion, enjoined when the "I Do" is pronounced. The mortal crack forms the moment the gavel falls and, except in the rarest of cases, cannot be stopped.

You must be aware that there are no winners in a divorce and unless you are exceedingly wealthy, no one wins the financial security award: credit ratings fall out the bottom due to divorce, especially for Respondents. In my case, only in the past few months have I experienced the beginning of recovery after almost 6 years of this tragicomedy of errors. If I am financially stable at the moment (meaning I can work more-or-less normal hours, pay my bills and still have funds leftover for weekly savings deposits...mostly), true financial security won't come for another half-decade at least.

I’ve said before that divorce is an emotional decision that relies on the lower passions for validity…and is also akin to what amounts to a business decision that no businessman, whether large or small, would ever make because the ROI is not worth the inherent risk – whether to the company (the nuclear family), the employees (the parents & the children) or the officers (the Spouses). Unfortunately, at least one spouse (if not both) fail to see this reasoning, remain oblivious the pleadings of financial insecurity, and barrel onwards towards their goal, unconcerned with the devastation that has already begun to accumulate in the swelling wake behind them.

No... people aren't always swayed by reason, but nor should they be swayed by their emotions. We Catholics are taught that the Passions must be subdued by Reason and this teaching is still extant even in the current Catechism (see #1767). As well, Part 3, Article's 5 & 6 are an indictment against divorce by any Catholic, in my opinion, were that section ever taught rightfully.  Unfortunately and thanks to No Fault Divorce, a Respondent is powerless to stop the civil and legal effects of divorce once initiated by the petitioner. And just as unfortunate, no (or very little) help is forthcoming from the Catholic Church, who prefers to just follow the "happiness" meme of modern marriages and promote annulments as the cure for the "irreparably broken" marriages that they themselves do not even make an attempt to save. (And this is made all the more apparent with recent changes to the annulment process.)

It is also an unfortunate reality that many divorced spouses fall prey to the modern meme that divorce and annulment solves all marital problems and embrace the always-promoted "healing" it provides (except for the children, of course, who carry the scars to their grave. Children are, in effect, an unwilling party to this travesty, for they have no voice in the matter, do they? Wither goes the Parent, so goes't the kids...) Truly, in some regards and from a strictly secular premise, I cannot blame them - who wants to live alone again after having been married for 5, 10 or 25 years? Who wants to face the reality of silent walls, silent bedrooms and silent dinners, when for years and decades you have lived with the cacophony of adult and children's voices, all chirping at once about the day's activities at work, at school and at home?

It is truly a hard yoke to carry for the remainder of one's life, as the past 6 years have proven, although I've also been fortunate Blessed to have had three of my children return to live with me these last three years while completing high school. This has been the savior of sorts for me - being once again a custodial parent and relieving the ache of a heart that had long since given up hope. The human heart is a resilient muscle to be sure, but no heart can long withstand - without Divine assistance -  the loneliness of divorce and the death, decimation and destruction that it brings to spouses and families.

All of the above is brought to you courtesy of your friendly and ubiquitous No Fault Divorce. Please do not fall prey to all the modernist hype of how divorce is your everlasting friend and able to place before you your very own personal "happiness platter" that you seemingly think you deserve, after having been involuntarily starved all these years. In truth - and outside of any type of abusive marital situations (which this blog does not cover - ever), divorce is friends with no one except divorce lawyers, and the Social Workers who deal with the aftermath of those known statistically as "Children of Divorce".

As I have repeatedly said, any law that has as its main by-product, well-known and documented harm to the innocent - YOUR very own children!! - needs no further reason in order to be scrapped, or at the very least, gutted so as to make it unenforceable by any civil or ecclesiastical judge.

It bears us all to remember two admonitions of Our Blessed Lord concerning HIS children:

"Suffer the little children, and forbid them not to come to me: for the kingdom of heaven is for such." (Matthew 19:14)

And especially the more important - and the most severe - admonition that precedes it:

"But he that shall scandalize one of these little ones that believe in me, it were better for him that a millstone should be hanged about his neck, and that he should be drowned in the depth of the sea." (Matthew 18:6)