Since 20-some percent of the NFL "Professional" (and I use the term loosely) athletes, a smattering of other similar "Professional" sportsmen(?), along with some of their handlers/coaches and owners/masters, clearly have no love of this country, its flag, its music, its opportunities (which include their ever-swelling personal bank accounts) - and probably not even of God Himself - I thought I would write for them their own "national anthem" to sing while they doth protest on bended knee while they are taking the liberty of scalping their fans (no longer am I one) on Sunday afternoons.

With much regret to Samuel Francis Smith, his My Country Tis of Thee and to England, I now present to you "The Protester's Anthem" (sung to the tune of God Save the Queen):


MY COUNTRY TIS OF THEE,
A SOUR LAND FIT ONLY FOR BENDED KNEE,
OF THEE I CONTINUALLY DING.

LAND WHERE MY FATHERS DIED!
ONLY FOR THE ELITISTS PRIDE!
FROM EVERY RIOT SITE,
LET PROTESTS RING!

MY SLAVE-BUILT COUNTRY, THEE,
LAND FULL OF ELITIST GLEE,
THY NAME I WILL NOT LOVE.

I HATE THY ROCKS AND RILLS,
THY MIDDLE CLASS, THOSE LOWER STILL,
MY HEART IS HARD AND I'M SO THRILLED,
FOR ALL THAT ABOVE.

LET RIOTS SWELL THE BREEZE, AND,
PROTESTS RING FROM ALL THE TREES;
LET'S SCREECH OUR SONG.

LET ALL MORTAL TOUNGUE'S AWAKE;
LET ALL THAT BREATHE PARTAKE;
LET OUR ROCKS THEIR SILENCE BREAK;
HEAR THE GLASS FALL ALL DAY LONG.

OUR NEW GOD IS TO THEE,
AUTHOR OF ANARCHY,
TO THEE WE SING.

LONG MAY OUR LAND BE BRIGHT,
WITH RIOTS HOLY FIRE-LIGHTS;
PROTECT OUR RIGHT TO FIGHT!
GREAT SATAN OUR KING!

Email ThisBlogThis!Share to TwitterShare to FacebookShare to Pinterest
Labels: Music, Parody Links to this post
No comments:

A Few Thoughts On the Filial Correction

I have written before that if Rome and certain of her henchmen (an apt description for most) that wear red, purple and black - or white, for that matter - cassocks, and who want every last one of the Catholic Faithful to march in willing lock-step to their new brand of Catholicism, they first have to remove all of the pre-concilliar documents that faithfully and forcefully contradict all of their new paradigms. Otherwise, they can only keep the cover on for so long and only pull the wool over the eyes of the faithful not much longer (time means nothing to God, except as it works to complete His Providence.)

Chief among those set-in-stone pre-concilliar documents - and the most blatant example of just how ineffective, weak and powerless they are - is the Sixth Commandment. The best they could ever hope for was to modify #6 into sub-categories that would allow for open and unrepentant adultery, and to further sub-categorize those exceptions under the headings of "mercy" and "for the children". In this they achieved their goal by taking the politician's playbook and baptising it into the Catholic Church. Politicians that already use those terms to get emotion-based voters to smilingly vote their money and freedoms away now have had their religious counterparts doing the same thing for decades: getting the emotions-based Catholic pew-sitters to willingly and sheepishly acquiesce to teachings, ideas and documents that are in direct contradiction to their Catholic Faith.

The trouble is - and why it was doomed to fail from the start - is they left intact and unlocked the rooms where all the ammunition that was needed by the more Faithful of the clergy and laymen (both male "laymen" and female "laymen", in a nod to PC-correctness) to use against them remained for the taking. And use it they are now doing - privately and finally publically. And I believe that the pressure will continue unabated for this Pontiff to correct his obvious errors, or face the just as obvious consequences.  Now that the the wheels of God's justice (and mercy) have finally turned with an ear-splitting groan, more names will surely follow those of the original 62 signatories.

So what did change? Why now? Why did it take so long?

Louie Verrecchio plainly points out (here) what he believes is the reason (my emphasis):

"...it certainly wasn’t the objective sense of the text of Amoris Laetitia, much less was it the dogmatic teachings of the Holy Catholic faith that are contradicted therein; rather, what changed, apparently, is that God’s grace has begun to open the eyes of those who were previously blind."

And I concur, for what it is worth.

God's time is not necessarily our time; He works to His Providence, not ours. Now is His right time; now is His right place. The sifting of the wheat from the chaff has its beginning and we must wait until the wind stops blowing to see what - or who - is left.

Let us continue to pray for the Holy Father, Pope Francis, that he returns to the Faith and to the patrimony he was elected to serve. To sustain the old, not usher in the new. To continue to proclaim the One, Holy, Catholic and Apostolic Church of Our Lord Jesus Christ. The One True Church of Christ, outside of which no one - NO ONE- can be saved. 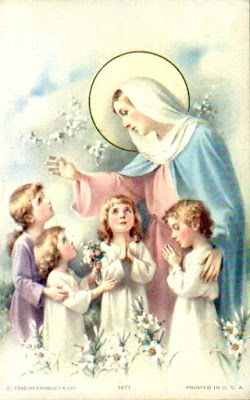 My children were all Consecrated to Our Lady at their baptisms, so I have no doubt that their inevitable Salvation is therefore assured. Whatever wrongs or errors they may presently hold - all are adults, with the youngest one becoming so this January - that keeps high the wall between us, Our Lady does not long leave Her children in that state and will come to their aid, and this repeatedly so. And oftentimes without being asked. There will be for each of them a "comes the dawn" moment to drive home this Truth, and they will wonder how they could have been so stupid for so long. They will still struggle to be sure, but they will struggle with a renewed sense of their eventual Salvation by their Blessed Mother.

That being said, I sometimes still fear that at least two of my children may never fully drop the wall, despite the reasons for its erection having long since been disproved. Too much time may have elapsed; too little urging to talk out the hurt. Too many parental mistakes made at the beginning. There has been too little of "me" into their lives over the last few years to any longer retain hope that I can have any real positive influence. In large part because they moved 600 miles away and I simply could not afford the bi-weekly travel expenses, even to a halfway point, to keep alive the parent-child relationship.

I have become a stranger to these children.

I have become only a "biological" Father in some photograph.

I have become just someone they used to know.

The saving Grace in all of this is that I have been granted over the intervening years a thawing and/or repairing of parent-child relationships. I have been privileged to once again being a residential parent, this made all the more striking as the request came from the estranged children themselves to live with me (they wanted to finish high school with their friends, but still unthinkable in the early stages.) Granted, it wasn't all lovey-dovey amongst us, but it did afford some opportunities for discussions, which should have been ongoing since day one anyway. But the lines of communication have remained open with most even after graduations. And now, once more, another has come home to jumpstart their career in more familiar - and missed - surroundings.

Is not all this the work of a Most Blessed Mother, trying to correct errant children - whether Parent or Child?

It doesn't take a Theologian to tell me to nod my head "Yes".

All it takes is my Heart, my Faith and my Love.

In your charity, please remember the Soul of young Daniel McDonald, who died in a multi-vehicle auto accident this past weekend. I did not know him or his family personally, but he was employed by the same Catholic company that I work for. A fine young man with a bright earthly future that was interrupted by God's Providence for his Heavenly one. 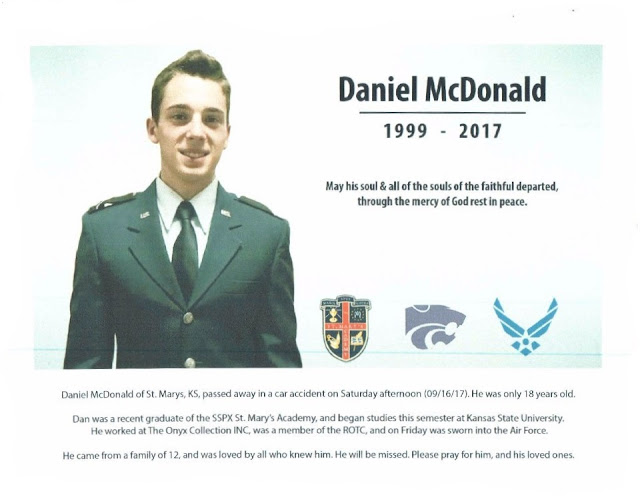