Kids, Divorce and the The Holy Ghost


Parental love in its purest form is not unlike iron: strong; unbreakable; unyielding. It is the unseen skeletal framework that hides beneath a parent's exterior and shields its immensity from public view.  And that none but God truly sees and understands (despite the many psychologists who try. If they did, all writings on the subject would be carbon copies of each other, which would testify to its objective truth and its author: God). Throughout our lives, various storms and battles asail this impregnable fortress, leaving in its wake not the successful capitulation and overthrow of the inhabitant, but the scar tissue that speaks of the many hard fought battles to protect this most valuable of assets: Parental Love. The reality, however, of this mortal world has lead some to voluntarily capitulate and to leave their fortress, but by and far the vast majority do not fail - themselves nor their children.

Divorce has - as one of its many known byproducts - the capacity to force abdication of parental love upon those parents unwary of its true diabolical form. They may stand fast for years or decades, but eventually fall prey to its unforgiving onslaught. They are caught, as it were, like the rock face of a cliff that silently endured the constant beating of the ocean's unrelenting wave only to slide - inexplicably and just as suddenly - into the oceans depth, worn out from the years of buffeting. The many nascent legal battles between the parents; the many heart-wrenching visits with estranged children; the many injuries sustained maneuvering through the divorce minefield trying to protect children caught in the crossfire; the many unanswered communications to children by a non-custodial parent; the gut-wrenching truth that one or both parents have been written out of the past and future lives of their child or children...all these can contribute to the sliding into the depths of discouragement and the bottomless pit of despair.

And it is the last truth noted above of being forgotten that most likely will be the catalyst - the final straw - for many divorced parents. Like the above rock face, they will awake some morning 10, 20 or 30 years hence and suddenly realize that they are tired of the fight, tired of the loneliness, tired of believing and tired of waiting... and just let all the love they have been trying to sustain fall into the sea. I know it has happened, but I truly hope the percentage is extremely small. And no...it hasn't happened to me, although admit to having  come close to doing so. 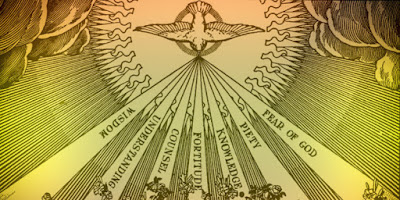 The God-given Grace of Parental Love cannot be jettisoned so easily, however. That would require a strength far above and beyond that which it takes to sustain it, and I believe that it was designed that way by God Himself. God is the Author of Life as well of Love, so it is a very understandable concept that the only way to jettison parental love is to jettison God - something which no sane Christian/Catholic would ever do. One might come close, but it becomes indomitable to do so after receiving the Sacrament of Confirmation. Those Seven Gifts that the Holy Ghost sends to us affect us as parents far more than we might realize, especially those Gifts of Understanding, Fortitude, Piety and Fear of the Lord. As parents, we may never come to know what depth of strength we truly have until we are faced with life-altering situations; as Catholics, we should be grateful and humbled that we have the Holy Ghost to thank for all that we need to sustain ourselves, should such situations - like a divorce or an unexpected and tragic death within the family - come into our lives.

This point is well made courtesy of an analogy from LOTR: The Return of the King:


Aragorn (our Conscience) bursts into Theoden's (The Holy Ghost's) war room meeting to announce that the beacons of Minas Tirith (our prayers) have been lit and that Gondor (the Parent[s]) have called for aid. Theoden, after a slight pause (fortunately for us, we know that the Holy Ghost would never pause), issues the marching orders for the Rohirrim (His Seven Gifts) to vanquish the Orcs (the devils).

So...you can hopefully understand one of the many hidden treasures of the Sacrament of Confirmation that remain unneeded for most Parents, but is nonetheless readily available, if only it is asked for.

It is no easy task for a parent to continue to love an estranged child; it is near impossible for a parent to do so without a fervent prayer life. I myself have come close numerous times and, but for the Grace of God, may have succumbed - to mine and my childrens detriment. That I am still here, still loving, still battling and still sustaining scars - is a testament not to me, but to Our Lord Jesus Christ and the Holy Ghost.

Do not weary, my fellow Catholics, of the parental battles, especially the battles associated with divorce and children. It is a truth that this is a battle that you may perhaps never win; at the least, it will become a stalemate between you and your children. But you can be assured that you will never lose as long as you "light the beacons of Minas Tirith".

And never lose Faith and Hope that reconciliation could occur at a most unexpected time, as befits Our Lord's Divine Providence.
Pray the Rosary. Love your Children. Stay close to the Sacred Hearts of Jesus and Mary.

Walk His and Her Calvary as you walk your own and you will never lose the hope nor the strength that is needed to complete the journey.