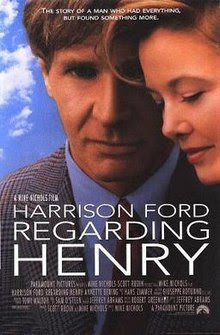 Regarding Henry is a 1991 movie starring Harrison Ford as an "Ambitious, callous, narcissistic, and at times unethical, Henry Turner..." and, like Henry Turner's more current alter ego Pope Francis, he is liked only by sycophants like himself. Unlike his Hollywood praeter alter ego, however, Francis has yet to have a life-altering, mind-changing, Conscience cleansing episode that will eventually restore his integrity, honesty, likeability and - most importantly - his Catholicity.

My own beliefs in Francis and his legacy are much like others believe (and some do not believe). To wit:

1. He is Pope until those in Rome who have the competence to convene an imperfect Council say otherwise. Until then, I'll keep praying for the miserable wretch.

2. He is undeniably a heretic. When one can change a Commandment of God, call it good, tell everyone in the Church that it is good and holy and still smile at doing so, then one can only be identified as heretical. One does not mock God.

3. He is most definitely a CINO - a catholic in name only. He was baptized into the Church one must assume, but beyond that, his actions over the past few years have shown he does not believe in Catholicism.

4. He is most definitely a modernist, globalist, socialist and UN mouthpiece.

5. He believes in contraception.

6. He believes in adultery and that it can produce a good and holy marriage - even though he forgets about - nay, negates - the continued pain and suffering of former spouses and their children. He enables the breakup of Catholic families, much like the Church he leads has done since 1983.

7. He belives in homsexuality among the clerics, else he would not continually enable and surround himself with them, rather than defrocking and laicizing them. He makes the sin of sodomy a badge of honor rather than of shame.

8. Left to his own devices and unrepentant at death, he will find a place in Hell that will not be to his liking - and most probably pretty damn close to Judas, if I may posit an opinion. One doesn't know the magnificence and munificence of Christ's mercy upon sinners at their death, however, so praying for his Soul must still be done.

There is so much more to write, but I suppose this is enough to get my point across, which is:

Francis has shown by example that he is unfit for the office he serves and should be deposed immediately and it doesn't take a Master of Theology, priest, Bishop or Cardinal to tell me so.

Frankly, I do not know why there is so much disagreement and dissension amongst the laity, Doctors of Theology, etc. about this. It is as starkly plain as the words of the 6th Commandment. No Catholic should need any one to tell them - they have but to look, listen and remember their Catechism (at least a Catechism published before the 1970's). But, it keeps some people in the forefront of the news, I suppose, perusing and parsing what comes from Rome to present the "good" spin to the world.

For me, I shall continue to "resist to the face" as best I can, whenever and wherever it requires me to do so.

To whom would you rather place the care of your Immortal Soul: Pope Francis and his ever-changing version of Vatican II Catholicism, or, Our Lord Jesus Christ and the Catholicism that He instituted?

Would you rather follow an ecumenistic catholicism that says everyone can get to Heaven by following their own false religion, or, the Catholicism that asks of you to follow the Cross of Our Lord Jesus Christ, to imitate His life, sufferings and yes, His joys in order to gain Heaven?

In truth, only the Cardinals can do something about Francis - at least here on Earth, anyway - but does that mean we laity and other religious should follow blindly someone who cares naught for our Souls?

This Catholic will continue to follow Pope Francis only when he speaks and promotes the Faith of the One, Holy, Catholic and Apostolic Church, something which can still be done even with the black curtain of Vatican II depriving Her of brightness. But when Francis the Heretic obviously turns a blind eye and raises his middle finger to that same Church, we most definitely part company and I retreat into the Catholicism of my ancestors.

Francis will, like all of men eventually must do, have to answer the question put to him by Our Lord:

"For what doth it profit a man, if he gain the whole world, and suffer the loss of his own soul? Or what exchange shall a man give for his soul?" [Matthew 16:26]