Via Canon 212, here is the link to the above article.

Christ is merciful to us by allowing we Catholics to suffer endless amounts of humiliation at the hands of this man, regardless of him being the reigning Pope. Let us pray for this Pope and for the humility and resignation to accept this particular Cross, but at the same time, we must utilize the courage granted to us at our Confirmations to fight against this Pope's modernist, un-Catholic and unbecoming-of-his-office behavior.

"Grant me the grace, O Jesus! to consider myself a pilgrim as long as I live...Give me patience in adversities, and so strengthen me, that I may willingly obey the lawful authority, though its laws and regulations should come hard and its tribute press upon me." (Rev. Fr. Leonard Goffine'sThe Church's Year: INSTRUCTION ON THE THIRD SUNDAY AFTER EASTER)

So, please do not ask me to "like and share" any photo that portrays starving children being stalked by predator lions, baby seals being eaten by polar bears, large chunks of ice falling from an iceberg from global warming, or even a photo of a cute bunny rabbit.


They are nothing - nada - compared to the millions of human Souls - and God's children - being slaughtered on a daily basis with no more thought than the swatting and killing of a mosquito on your arm.

A Holy and Blessed Easter to All!

Christ has risen. He once again opens the gate of Heaven to all, though all will not be saved. Free Will, or rather the misuse of Free Will, will forever bar some from entering. We all must choose to cooperate with his Grace for our salvation to happen, but not all will choose to do so.

So also must the modern Catholic Church choose to change, or rather, to simply return to what always was.

Vatican II has failed and will always fail.

Aggiornamento has failed and will always fail.

The New Mass has failed and will always fail.

Decades of "new springtimes" have come and gone and the Catholic Church still suffers from the wounds received at the hands of the modernists. The architects of Vatican II are gone. They have faced their Judge and gone to their ETERNAL reward - Heaven or Hell. Many other anarchists have followed in the ensuing decades, bringing their modernist marks upon the Church. Vatican II continues its seemingly unrelenting march to deconstruct Catholicism, those now in charge oblivious to the futility because many of them lost their Faith a long, long time ago. Trying to bring the Catholic Church into the modern worlds light, they should instead be bringing the world into the Light of Truth of the Catholic Faith.

Opposite poles attract; like poles repel. It is basic science; it is objective truth. Elementary school students understand the principle...ordained, learned men apparently do not.

The Catholic Church yet remains in her "three days of (seemingly perpetual) darkness", but we know by our Faith and Christ's own words She will gloriously arise on some future "Easter Sunday" not known to us. The light of Truth will again be shown to the world, and hopefully, this time, the world will embrace it.

The Face of Humiliation and Capitulation 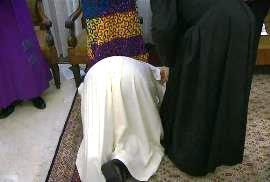 May Our Lord Jesus Christ soon have mercy upon us...


I link to a petition (HERE) via America Needs Fatima, requesting Illuminidol.com stop the selling of the Sacred Heart of Jesus and the Immaculate Heart of Mary devotional candles that have the faces of Jesus and Mary replaced with the likes of: Ruth Bader Ginsburg, Alec Baldwin, Beyonce, assorted cartoon characters, singers, politicos and even a former demigod himself - Bill Clinton.

Another case of the ridiculing of the Catholic Faith (something that the Church of Vatican II itself does daily, but that is another post entirely) for profit. What this company offers is both disgraceful and disgustingDiversity and equality is not this company's cup of tea obviously...targeting the Roman Catholic Faith exclusively apparently is.


I've added below the email that I sent to Illuminidol on April 9th via their contact page, but to date have received no reply. Probably won't, I'd guess.

I'd urge one and all to click over to ANF and add your name to the petition. Then go to Illuminidol.com's web site and do the same. Let them know that the Catholic Sheep are watching, even if the Catholic Shepard's are not.

Since you seem to believe it is "open season" on a Roman Catholic devotional practice in general -  and an attack upon the Roman Catholic Faith, the Son of God and His Blessed Mother in particular - can I expect to soon see devotional candles with depictions of other religious deities such as Mohammad, Buddha, Yahweh, Shiva, etc?

After all, if you are going to be irreverent and/or blasphemous to 1.2 billion Catholics, you should be more inclusive and not focus your attention on this one particular religious group. How about including candles for  the 1.2 billion who practice Islam? The 900 million who practice Hinduism and the 376 million Buddhists?  Think "Increased Sales" and you will soon see the validity of my query...

In truth, what you should do is remove all depictions of the Sacred Heart of Jesus, the Immaculate Heart of Mary and any associated likeness of either. It is unfair, uncharitable and, to some, blasphemous to paste parody photos upon the images of Jesus and Mary - whatever their form. It also shows a vast intolerance towards and a gross misinterpretation of a uniquely Catholic devotional and religious practice in order to make a few dollars of profit.

I would appreciate knowing what depth of market study you did that assured you that such ridicule of the largest Christian denomination would, in fact, be a sure fired sales bonanza for your company.