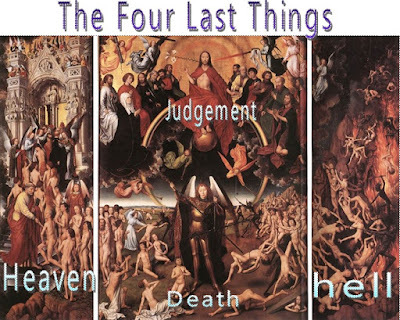 All Catholics should know the seriousness of The Four Last Things, their having been taught to us from about second grade and only ending after high school - or so it was in the more sane years prior to Vatican II. I don't know if the doctrine is even taught nowadays...for all I know, it has dropped off the radar of most modern Catholics. If your great-grandfather still believed in the four last things in the early VII era, your grandfather likely did even less as VII grew into its teen years and your father may not have even heard of them at all as he - and VII - grew into adulthood. Out of sight...out of mind, as they say. Today, I doubt that very, very few post-Vatican II Catholics believe fully in Judgement or Hell, let alone Death. Everyone thinks they'll wind up in Heaven as long as they say "JEESSSUUUSSS!" as they breathe their last coarse, raspy, rattling breath. Sadly, any sane Catholic (read: those who hold fast to the Traditional pre-VII Church teachings) will know otherwise...

I have no empirical data to prove the above statements; all I have are my own observations of the last 4 or 5 decades. From those observations, I have a firm belief that most present-day modern Catholics have only a limited belief in The Last Four Things, and especially so of Judgement and Hell. I put the blame for this lack of belief where it belongs: at the feet of Vatican II and Ecumenism (i.e. Protestantism, Episcopalianism or any of the other false religion -ism's out there.) When the Catholic Church embraced ecumenism, it watered down many aspects of prior Catholic Teaching, chief among them being the The Last Four Things. Now, it seems that all dogs do go to Heaven, or, at the least, they don't even reach Hell.

And that particular point is so readily apparent today, for example: Pope Francis's alleged comments about the Soul being annihilated at death and Bishop Robert Barron's comments about Hell being unpopulated. Both pretty much bleed dry the seriousness of the Four Last Things, living your earthly life as Christ lived His and especially the hope of Final Perseverance. If, as Bishop Barron writes, all peoples - including the damned - eventually get to Heaven, then of what value is Confession, Holy Communion, or even making earthly Reparations for our sins? Of what value are prayers and supplications to Our Lady as Mediatrix before the Throne of Our Lord Jesus Christ? Of what value was Our Lord's Passion? Only symbolic gestures all?

And if they do not, how can any modern-day Catholic be expected to??