The German Bishops Conference apparently has begun the nascent steps of breaking from Rome and birthing the Deutsche Nationale Katholische Kirche*, or simply, the DNKK. This news has, apparently, hardly registered with Catholic Bishops or lay Catholics world-wide, let alone those in Germany. It is certainly another sad day for Catholicism, already reeling amid so many other sad days.

Every professed Catholic the world over, excepting those ubiquitous CINO's, should be madder-than-hell over this monumental news. Here we have a renegade group of Bishops, supposedly loyal, firstly, to Christ Himself and, secondly, to Holy Mother Church and its visible Head, the Pope (however bad Frances may be, he is still the Pope) deciding enmasse on Spiritual suicide...and getting away with it! I would have thought that as soon as this story unfolded, a strong condemnation would have been fired off from Santa Marta, reminding these Bishops renegades and Pope Cardinal Marx just who is the Head of this earthly Catholic Church and whom is to follow who. The Pope, as a matter of leadership, should have fired those Bishops renegades who led this schism immediately and appointed caretaker bishops from Africa until new Bishops were named.

But then again: collegiality**.

So, apparently, life will go on:

And finally, Pope Francis, the visible head of the Roman Catholic Church, will welcome the new Pope Marx to Santa Marta as a fellow Pope and Christian. In a show of solidarity with this new and evolving church, Pope Francis will kiss the feet of this newly-mitered ambassador, declaring with reckless abandon that faithful Catholics have yet another path to Salvation outside the Roman Catholic Church. Later in the week, both Popes will concelebrate a Mass of Thanksgiving, thereby cementing this schism as the Will of Christ, and that Roman Catholics are free to attend DNKK churches to fulfill their Catholic Mass and Sacramental obligations. 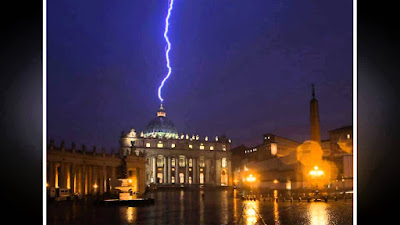 And the following day, the worst lightning storm in European and Roman history strikes St. Peter's Basilica, shattering its dome beyond repair. Pope Marx immediately notifies Francis the DNKK will provide the funds needed to rebuild & repair St. Peters to a more proper and grander cathedral, worthy of such a humble servant of the World.

Obviously, some of the above is fact, while some is pure conjecture on my part. But even the conjecture portion has some possible - nay, probable - truth buried within the words. The DNKK already is acting like a Church unto themselves at this very moment, so it is simply a matter of time before conjecture becomes possible, then probable, then fact. It may not happen during what may be left of the Francis pontificate, but it could surely happen during a Francis 2.0 one (see here for corroboration of this theory).

To any German Catholic readers of this blog I say this: do not be misled by these renegades and charlatans. They are not acting as a Catholic Bishop should; as true Shepard's of the Church, and certainly not as Apostolic ones. Do not take what they say as Catholic Truth, until it has been verified as such. And in this matter, the German Bishops are diametrically opposed to God, Our Lord Jesus Christ and Church Teaching. No man on earth can add one jot or tittle to the 6th Commandment or change the reason Sodom and Gomorrah were destroyed. To even hint the affirmative is to (1) admit God is fallible and (2) acknowledge a divinity no man on earth can have.

Remember the words of the serpent to Eve: "No, you shall not die the death. For God doth know that in what day soever you shall eat thereof, your eyes shall be opened: and you shall be as Gods, knowing good and evil."

Are not these men making themselves "...as Gods"?

Remember also these words from Matthew: "And fear ye not them that kill the body, and are not able to kill the soul: but rather fear him that can destroy both soul and body in hell."