I wrote this almost 4 years ago to bring attention to the very first members of the Black Lives Matter movement. These brave men and women, many martyred for their Faith, also knew that it was not only Black lives that mattered, but all lives; there was then and can be now no distinction between them, as all are Children of God.

The BLM of today has no similarity to the BLM of the last few centuries. What a pity that is. Ed

For your consideration, I submit below 5 members of the earliest known "Black Lives Matter" movement, well worthy of emulation by those of any ethnicity, not just Black. Click on the names for a more complete profile. 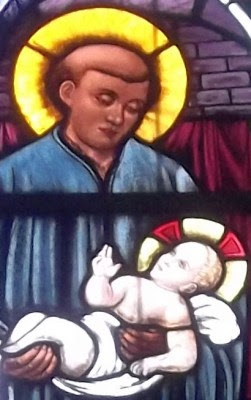 Benedict the Moor, O.F.M., (Italian: Benedetto da San Fratello, 1526 – April 4, 1589) was an Italian Franciscan friar in Sicily who is venerated as a saint in the Catholic and Lutheran churches. Born of African slaves in San Fratello, he was freed at birth and became known for his charity. As a young man he joined a Franciscan-affiliated hermit group, of which he became the leader. In 1564 he was sent to the Franciscan friary in Palermo, where he continued good works. (From Wikipedia)


One of 22 Ugandan martyrs, Charles Lwanga is the patron of youth and Catholic action in most of tropical Africa. He protected his fellow pages (aged 13 to 30) from the homosexual demands of the Bagandan ruler, Mwanga, and encouraged and instructed them in the Catholic faith during their imprisonment for refusing the ruler’s demands.

For his own unwillingness to submit to the immoral acts and his efforts to safeguard the faith of his friends, Charles was burned to death at Namugongo on June 3, 1886, by Mwanga’s order. (From Franciscan Media) 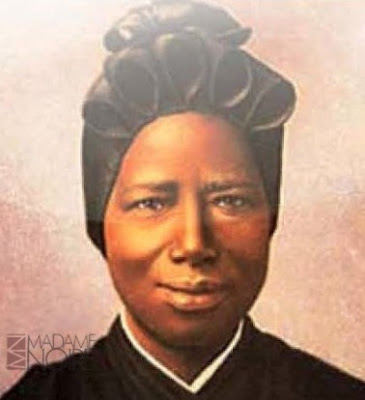 Josephine Margaret Bakhita, F.D.C.C., (ca. 1869 – 8 February 1947) was a Sudanese-born former slave who became a Canossian Religious Sister in Italy, living and working there for 45 years. In 2000 she was declared a saint by the Catholic Church. (From Wikipedia) 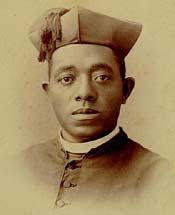 Servant of God Augustus Tolton (April 1, 1854 – July 9, 1897), baptized Augustine Tolton, was the first Roman Catholic priest in the United States publicly known to be black when he was ordained in 1886. (James Augustine Healy, ordained in 1854, and Patrick Francis Healy, ordained in 1864, were of mixed-race.) A former slave who was baptized and reared Catholic, Tolton studied formally in Rome.

He was ordained in Rome on Easter Sunday of 1886 at the Archbasilica of St. John Lateran. Assigned to the diocese of Alton [in Illinois and where I grew up and worked for many years in my youth - Ed.] now the Diocese of Springfield), Tolton first ministered to his home parish in Quincy, Illinois. Later assigned to Chicago, Tolton led the development and construction of St. Monica's Catholic Church as a black "national parish church", completed in 1893 at 36th and Dearborn Streets on Chicago's South Side. 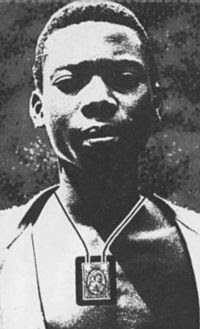 
Isidore Bakanja, is a young Congolese born in Bokendela . A convert to Catholicism , he became a lay catechist. Hired in a Belgian colonial company undergoes the persecution of Director of the Agency which is strongly opposed to the evangelization of his workers. Whipped up blood, he dies from his injuries 15 August 1909. [He] is recognized by the Catholic Church as a martyr of the faith. Pope John Paul II beatified him in 1994. (From Wikipedia)
There are, of course, many, many more Black and African saints in the Roman Catholic Church. For more, click on the following link:Black / African Saints.